Manchester City midfielder Bernardo Silva is to be offered a massive new deal by the club in a bid to persuade the 28-year-old Portuguese to stay despite interest from Barcelona and Paris St-Germain. (Star Sunday)external-link

Manchester United manager Erik ten Hag has been given approval by the club’s owners to spend his way out of trouble – by chasing deals for Netherlands pair Frenkie de Jong, 25, of Barcelona and PSV Eindhoven winger Cody Gakpo, 23, as well as Ajax‘s Brazilian winger Antony, 22. (Sunday Mirror)external-link

However, United are set to miss out on Chelsea wide forward Christian Pulisic, 23, with the USA international keen to join a club in the Champions League if he leaves Stamford Bridge. (Mail Online)external-link

Real Madrid will use the money from Casemiro’s sale to Manchester United to pursue a deal for Borussia Dortmund and England midfielder Jude Bellingham, 19. (Marca – in Spanish)external-link

Aston Villa have agreed a fee with Watford for Senegalese striker Ismaila Sarr, 24. (Foot Mercato via Inside Futbol)external-link

Sarr’s team-mate Joao Pedro is the subject of a final £25m bid from Newcastle – with Watford having turnied down two previous offers for the 20-year-old Brazilian forward. (Fabrizio Romano)external-link

Tottenham, Leeds and Southampton are all keen on Manchester United midfielder James Garner, despite the 21-year-old Englishman never having started a Premier League game. However, all three clubs are unwilling to pay the £14m asking price. (Sun on Sunday)external-link

Marseille have agreed a deal with Manchester United for Eric Bailly. The 28-year-old Ivorian centre-back is set to join on loan, with the French club having the option to make the switch permanent. (Fabrizio Romano)external-link 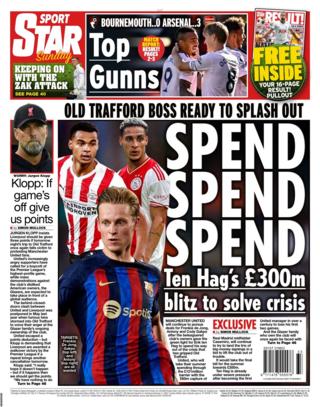 Back page of the Daily Star Sunday

Anthony Gordon: Do Everton stick or twist on £50m-rated youngster?