As Muirfield — home to a golf club founded in 1744 — played host to the women’s event for the first time, Ashleigh Buhai lifted her first major title on her 221st career LPGA Tour start.
On an enthralling final day befitting of the occasion, the South African snatched victory from the jaws of defeat, roaring back from the brink of a late collapse to pip three-time major champion Chun In-Gee in a nail-biting four-hole playoff.

In doing so, Buhai added her name to an illustrious list of South African golfers to have won at Muirfield, the site of maiden men’s Open wins for Gary Player and Ernie Els.

Yet while the legendary duo have 13 major titles between them, Buhai will forever hold the unique honor of being the first women’s Open winner at the fabled Scottish links course. With Muirfield overturning its male-only membership policy in 2017, the added significance of triumph is not lost on Buhai.

“To add my name to that list with Gary and Ernie, it’s such a huge honor,” she told CNN’s Don Riddell.

“But also being the first female to win at Muirfield, we made history this last week … times are changing.

“Everybody there last week was fantastic, the crowds were fantastic — they welcomed us with open arms.” 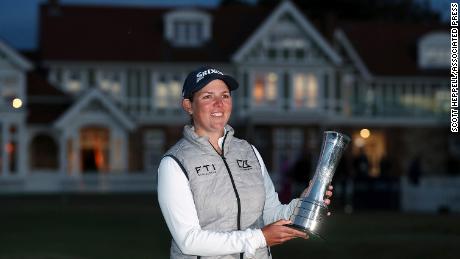 The 33-year-old’s grasp on a landmark win looked to be slipping away at the death when she triple bogeyed the 15th hole, the five-shot advantage which she held at the start of the final round evaporating as Chun drew level.

Having bogeyed just once each day prior — carding one-under 70, 65, and 64 — Buhai now required three straight pars simply to scramble to four-over 75. But rather than panic, the South African was determined to keep a cool head.

“I just said to myself, ‘okay, we’re back to tied for the lead’ … I hadn’t lost it yet,” Buhai recalled.

“I still had three holes to go. And my caddie just said to me, ‘let’s get back in it and focus on the next shot.’ And that’s all I could do, the only thing I controlled would be the next shot.

“I’d done so much well that week, so I tried to not let the one hole just disrupt my whole week.” 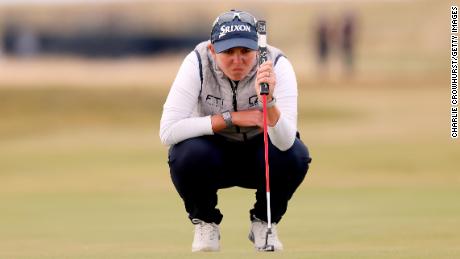 Sure enough, Buhai held her nerve to close out with three pars and set up a nail-biting sudden death playoff with Chun.

The tension for Buhai was only further compounded by the pedigree of the opposition, as Chun chased her second major of the season following victory at the PGA Championship in June.

“I was just trying to stay in the moment, focus on every shot,” Buhai said.

“I knew In-Gee was going to be a fierce competitor, she’s a major winner already.” 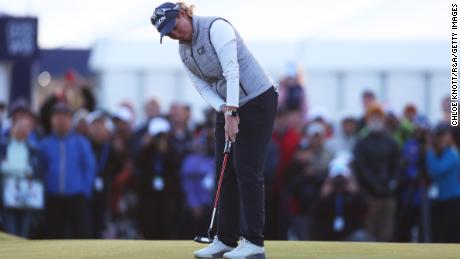 Unable to be separated after three rounds of the 18th hole, the deadlock was broken when Chun — having found a bunker from the tee — could only bogey. Despite joining her opponent into the sand, an incredible approach shot from Buhai left her with a short putt for a first major title.

Making no mistake, the South African rolled the ball home. After looking to the sky, the new champion was embraced by her husband David, a picture of anxiety and stress throughout the playoff. 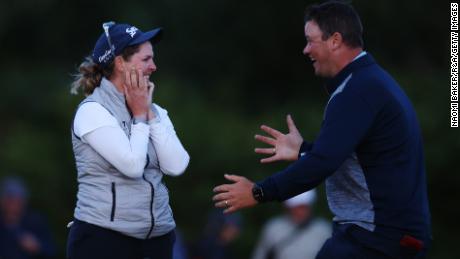 A tearful Buhai paid tribute to her husband — who had previously caddied for her for eight years — in an emotional post-win interview. After turning professional in 2007, triumph at Muirfield marked an unprecedented new peak in a “long journey.”

Despite three wins on the Ladies European Tour, Buhai — having never finished higher than 5th at a major — was still gunning for a first victory on the LPGA Tour when she landed in Scotland Thursday.

The joy of ending that drought was only sweetened by the claiming of a $1,095,000 prize purse, rocketing her career earnings to $3,503,926 and continuing a landmark year for prize money in women’s golf.

Minjee Lee’s $1.8 million winnings of an unprecedented $10 million pot at the US Open in June was followed by another record purse at the PGA Championship, where Chun took home $1.35 million of a $9 million purse that had doubled from the previous year’s event. 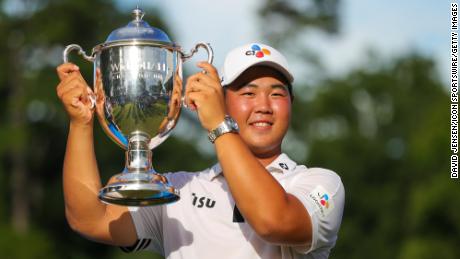 Alongside the increased media attention that comes with being a major champion, they are the sort of figures that are set to turn Buhai’s world upside-down.

“The money that we’ve playing for now … it’s life-changing for us,” she said. “We’ve never played for this amount of money, so the purses are great.

“I think I’m only going to realize it in a few months down the line when things really start to hit home.”

‘I think this would be a good movie’: Why a Georgia realtor was invited to play The Masters

Jordan Spieth on the joy of trash-talking Tiger Woods

The 10 most bizarre golf courses in the world