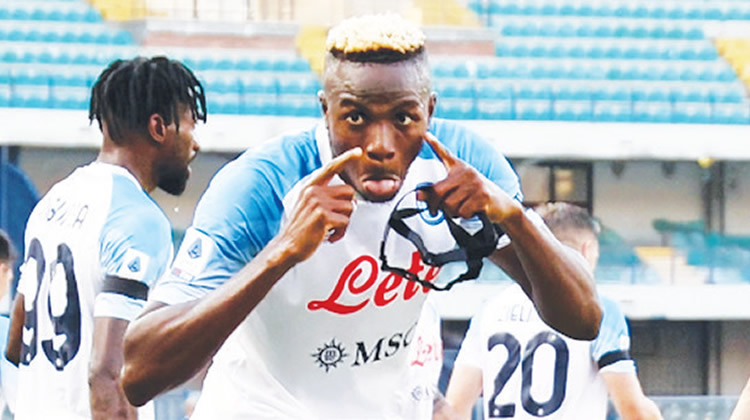 Victor Osimhen taunted racist Hellas Verona fans after he scored his first Serie A goal of the season for Napoli, who fought back from a goal down to win 5-2 at the Stadio Bentegodi stadium on Monday, PUNCH Sports Extra reports.

The Nigerian striker also made a back heel flick assist for Matteo Politano to score Napoli’s fifth goal from 12 yards in the rout.

Kevin Lasagna’s cushioned volley at the back post shot Verona into the lead in the 29th minute, but parity was restored when Kvicha Kvaratskhelia headed in Chucky Lozano’s cross eight minutes later.

Napoli turned it around with a goal almost identical to Verona’s, this time a corner was flicked on by Giovanni Di Lorenzo for Osimhen to score with a flexible attempt at the far post.

After scoring to hand the Partenopei a 2-1 lead in the 46th minute, the 23-year-old kicked the ball into the stands in anger at the Hellas Verona fans, who had been hurling racist abuses and monkey chants at him each time he touched the ball during the encounter.

The Nigeria international also mocked the fans by pretending to cry into the camera as he celebrated his goal with his teammates.

The former Lille striker, who was replaced in the 83rd minute of the win by Adam Ounas, was booked for a foul on Koray Guenter in the 54th minute.

Napoli host Monza at the Diego Maradona stadium on Saturday.

Reacting to his side’s win Osimhen said, “It is important for us to start well because we have lost some great players.

“I am very happy for this victory because it was not easy. We have to feel like last year. This victory shows we are on the right track. I don’t care how many goals I score, I will score to help the team but I always put the team first.

“Spalletti trusts me and he tries to encourage me, it is normal to make some mistakes during matches. He also helps me a lot with individual work.”

On being one of the leaders in the team, the 23-year-old said, “It is important that we all have to take a share of the responsibility. I’m in my third year at the club and it is important for me to encourage new ones like Kvaratskhelia. He had predicted my goal two minutes earlier

BBNaija: See Housemates Up For Eviction This Week