A dissatisfied young lady has chided her man for underperforming in the bedroom.

Apparently, the young who had been completely exhausted following his bedroom session had stormed the kitchen to prepare himself a bowl of Golden Morn and ground nuts. 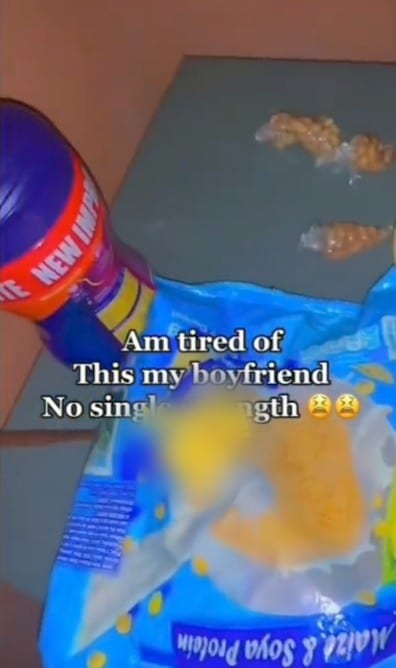 The lady, making a video of this, mocked him as she wondered why he wants to eat a large amount of food when he did close to nothing in bed.

She could be heard asking him how many minutes he had lasted in bed.

The boyfriend can also be seen clutching several sachets of what appears to be glucose.

“Am tired of this my boyfriend. No single strength,” she wrote.

PlayStation sued for £5bn in the UK over ‘rip-off’ games

EPL: Liverpool not out to humiliate Man Utd- Fabinho

How we celebrated Nigeria’s Independence in 1960 –Entertainers

EPL: Liverpool not out to humiliate Man Utd- Fabinho

Tesla debuts an actual, mechanical prototype of its Optimus robot

Tesla debuts an actual, mechanical prototype of its Optimus robot