Ajax’s Brazilian winger Antony, 22, is pushing to join Manchester United before the close of the summer transfer window. (Goal)external-link

But United remain in the hunt for PSV Eindhoven’s 23-year-old Dutch winger Cody Gakpo but are only likely to sign one of the forwards before the window closes. (Telegraph)external-link

The Old Trafford club will block any move for England defender Harry Maguire after Chelsea made an enquiry for the 29-year-old. (Sun)external-link

AC Milan have made another approach for Tottenham’s English centre-back Japhet Tanganga, 23. (Calciomercato – in Italian)external-link

Newcastle are hoping for a transfer breakthrough this week as the club work on two deals and believe a move for Watford’s Brazilian forward Joao Pedro, 20, is possible. (iNews)external-link

Lazio are looking at a move for Tottenham’s Spanish left-back Sergio Reguilon, 25. (Calciomercato – in Italian)external-link

Nottingham Forest are interested in signing Serge Aurier, 29. The Ivorian right-back is a free agent after being released by Villarreal. (Footmercato, via Express)external-link

Tottenham could sign Atalanta’s Ruslan Malinovskyi, 29, with the Ukrainian midfielder unconvinced about a move to Marseille. (Footmercato – in French)external-link 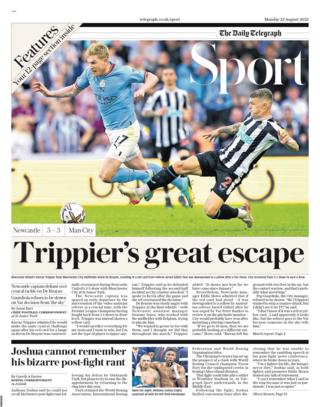