Whether you suffer from seasonal allergies or have the occasional cold, you’ve probably dealt with a stuffy nose. Your go-to is probably OTC meds, but what about a neti pot? Some people swear by the relief from clogged sinuses as well as facial pressure and pain they get by flushing out their nasal passages through this nasal saline irrigation method. If you’ve never used it before, though, it can be quite intimidating. Learning how to use a neti pot will give you another tool to clear up a stuffy nose when you need it.

The neti pot is nothing new—in fact, it’s been around for centuries, with roots in Ayurvedic medicine. For good reason too: Using a neti pot can be beneficial for both short-term issues (think: colds, flus, and sinus infections) or more long-term nasal conditions, says Aaron Pearlman, MD, an otolaryngologist at Weill Cornell Medicine and New York-Presbyterian.

“If you have an acute nasal issue, sinus irrigation can be helpful in just mechanically removing that mucus, so you can breathe a little bit better after you do it,” Dr. Pearlman says. “In the chronic setting, for those people who have the persistent dysfunction of the way their nasal mucosal lining works, those people benefit from daily use over time, letting the nasal lining sort of reestablish normal function.”

Meet the expert: Aaron Pearlman, MD, is an associate professor of clinical otolaryngology at Weill Cornell Medical College. He is an author in many studies looking into the diagnosis and treatment of sinonasal disorders in adults and children, including rhinosinusitis and diseases of the skull base.

Neti curious yet? Here’s what you need to know about nasal saline irrigation and whether it might work for you during cold and flu season—or even year-round.

How does a neti pot work?

A neti pot resembles a dainty tea pot, with a bulbous body that holds saline solution, and a spout that pours liquid into your nose. When you put the spout up to your nostril, tilt your head to the side and pour, the force of the liquid entering your nostril pushes the mucus through your nasal passage and out the other nostril—or in some cases, through your mouth (yeah, not the most appetizing). Your nose should immediately feel less stuffy after using a neti pot, if done correctly. (More on that in a bit.) 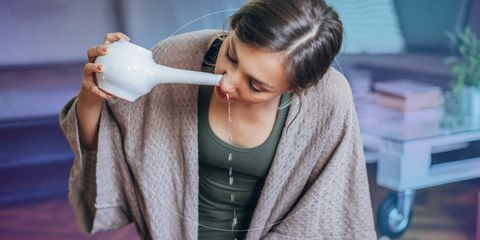 The neti pot is actually just one of the ways you can perform nasal saline irrigation. There’s also a bulb syringe or, Dr. Pearlman’s preferred method, a bottle. (The squeeze bottle provides more force—and therefore may unclog your nasal cavities better—than a neti pot.)

Whichever method you choose, you’ll want to follow the directions on the box closely, including using a hygienic saline solution. Dr. Pearlman recommends picking up the pre-packaged mixes available at drug stores since they can be gentler on the nose than a regular salt-water concoction you’d mix up in your kitchen. 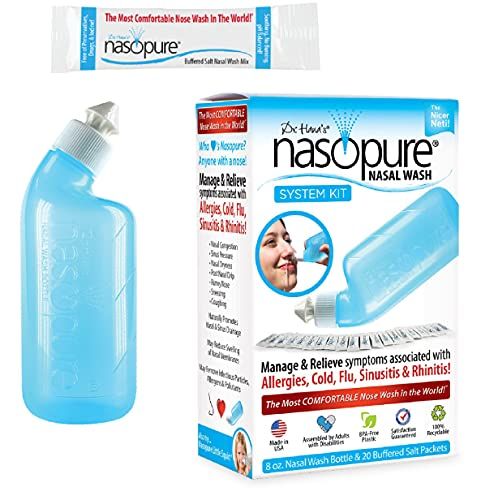 And when you mix the solution, don’t use just any old tap water—you need either distilled water or boiled water that has cooled to a lukewarm temperature. This is because normal tap water (or even water that has been through a filter) can have small amounts of bacteria or protozoa. When swallowed, bacteria are usually killed by stomach acids, according to the Food and Drug Administration, but they can be harmful in the nasal passages, particularly if you’re immunocompromised.

What are the benefits of using a neti pot…and are they proven?

If you have a cold, the flu, or a sinus infection, a neti pot can be a quick and safe way to remove mucus from your nose. Dr. Pearlman doesn’t necessarily recommend trading in your tissues or decongestant in favor of nasal irrigation, but he says that those methods can complement one another.

For instance, if that snot is just too far back in your nose for you to expel into a tissue (sorry for the visual!), a neti pot could be a good option for getting the gunk out. Alternately, he says, if you are someone who doesn’t like to use OTC drugs, you may want to try a neti pot first before reaching for a decongestant, as it’s a more natural option. 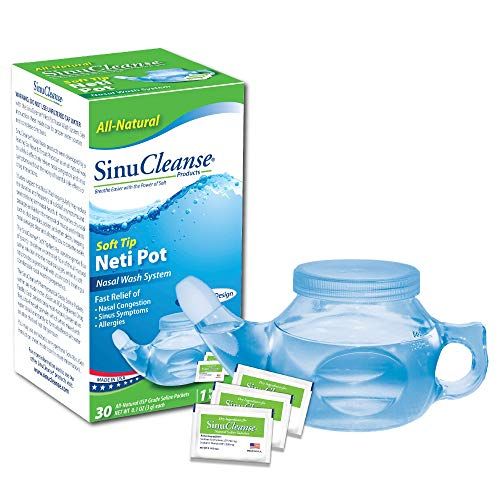 If you have a more long-term ailment like chronic rhinosinusitis (12 or more weeks of nasal congestion and pressure), saline irrigation has been shown to help treat symptoms, according to a study in The Laryngoscope.

All that said, if you are immunocompromised, you’ll want to check in with your doctor before starting any sort of neti pot regimen, as the problems in your nasal passages could be a sign of something more serious.

Are there risks to using a neti pot? How can you avoid them?

You’ve probably seen one or two scary headlines about nasal irrigation—including one in which a woman died from a brain infection called Balamuthia mandrillaris after using a neti pot. These instances are rare, says Dr. Pearlman, but they do underline how important hygienic use is with nasal irrigation methods. In most cases that hit the news or scientific reports, the individual was using a neti pot with tap or other potentially dirty water, allowing harmful bacteria into their system.

Another dangerous bacteria, Naegleria fowleri, is also found in water and can make its way to the brain through the nasal passage, causing primary amebic meningoencephalitis (PAM). Of the 145 known Americans who have contracted the brain-eating ameba, only four have survived, according to the CDC. (Of these infections, two were linked to neti pot use.)

The symptoms of PAM are similar to those of bacterial meningitis (meaning it’s pretty hard to diagnose) and include fever, nausea, vomiting, and a severe headache. Later and more severe symptoms include stiff neck, seizures, and hallucinations. But if diagnosed early enough, PAM can be treated with a drug called miltefosine.

To avoid dangerous germs like Naegleria fowleri, it’s important to not only mix your saline solution using sterile water (again, either distilled or boiled!) but to also keep your nasal irrigation system clean by following the instructions on the label. If you’re using a bottle, Dr. Pearlman recommends replacing it every six to eight weeks.

And, of course, it probably goes without saying, but you shouldn’t share your neti pot, bulb, or bottle with *anyone* else.

Beyond those scary infections, there are one or two much more mild adverse reactions you could experience using a neti pot. Because your ear, nose, and throat are all interconnected, you may accidentally get water in your ear while using a neti pot. This can cause some temporary hearing loss, which should clear up once the water is gone.

Give it to me straight: Do neti pot benefits actually outweigh the dangers?

The bottom line, says Dr. Pearlman, is that if you’re using your neti pot as indicated, the risks should be low and you may benefit from adding nasal irrigation to your wellness practice.

“I don’t think everybody in the country needs to be doing saline irrigation because not everyone has nasal complaints,” he says. “But I think if you are the type of person who is stuffy and chronically congested, saline rinsing on a daily basis is a safe, easy, and effective thing to try.”

So, how do you do use a neti pot without making a complete mess?

Good question! You probably won’t want to wear your fanciest top the first time you use a neti pot. But if you follow a few simple instructions, you can hopefully avoid unwanted water works: 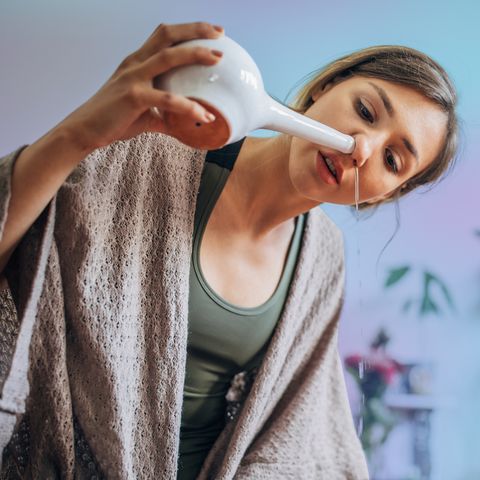 And with that, hopefully your schnoz will feel less clogged.

Amy Wilkinson is an entertainment editor who also specializes in health and wellness. When not editing or writing, she can be found teaching Pilates as a comprehensively certified instructor.

Jackie Lam is the senior health editor at Women’s Health where she oversees health and weight loss content for the website and the Mind section of the print magazine. Originally from Hong Kong, she’s a journalist with more than 10 years of experience and a proud graduate of Cornell University and the Medill School of Journalism at Northwestern University. When she’s not at her laptop, she can be found experimenting with Japanese recipes in her kitchen with her husband as her main taste tester, discovering the latest in K-Pop, and dreaming up her next trips to Japan.

Why an Acupuncture Mat Is a Game-Changer for Mental Health

This TikTok Trend Is Claiming To Cure Hangovers

How transnational investment firm swindled Nigerians, others of over $3m (2)