Yorubas must deliver 95% of their votes to me; reject Atiku, Obi – Tinubu

In one year’s time, President Muhammadu Buhari will vacate office after eight years of service as the number one citizen of Nigeria, and already, the race for who would take over from him in 2023 has commenced.

Under the All Progressives Congress, Bola Tinubu, former governor of Lagos State, has made his ambition known to Nigerians, as one of many candidates eyeing the president’s seat.

In a recent interview with Daily Trust, Mr. Tinubu made a claim that, during his tenure as the Governor of Lagos State, he received zero allocation from the Federation Account Allocation Committee.

He also claimed that Lagos State became the largest economy in Africa, despite the lack of allocation from FAAC.

MORE FROM INSIDE REPORTS

“With zero allocation from FAAC, I turned Lagos State around and today, the state has become the largest economy in Africa,” he claimed. 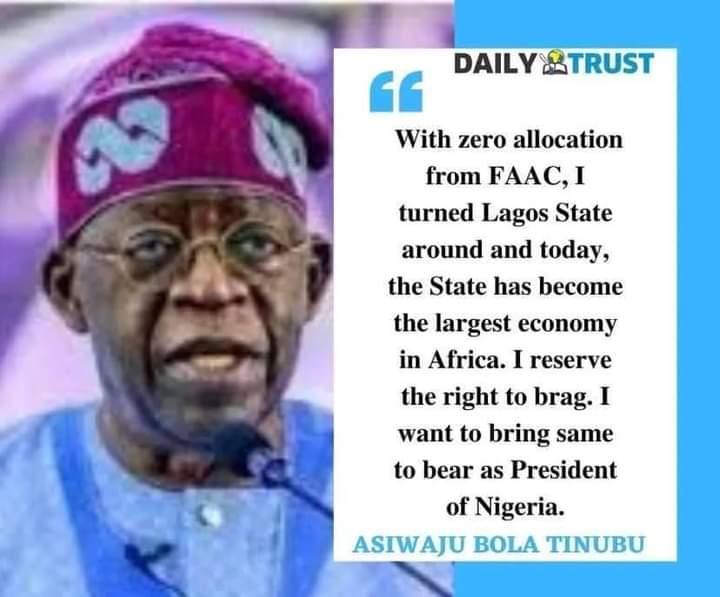 The claims in a graphical representation

Due to the wide circulation of the claim by the mainstream media and its potential consequence on the decision of electorates’, it is pertinent that DUBAWA fact-check this claim.

Claim: Presidential aspirant, Bola Tinubu, in a recent interview with Daily Trust made a claim that Lagos State received zero allocation from the Federation Account Allocation Committee during his tenure as the Governor of the state.

Bola Tinubu failed to mention that the federal government started to withhold Lagos State funds in 2004 while his tenure started in 1999. This means he received allocations from FAAC until April, 2004.

DUBAWA conducted a keyword search on any withheld allocation of the Lagos State Government by the Federal Government and found a report by All Africa in 2005, about the then President, Olusegun Obasanjo, giving his reasons for withholding Lagos State local government funds.

The screenshot of the report on All Africa

Notably, when Vice-President, Prof. Yemi Osibanjo recently called on state governors to start making huge investments in areas they have a comparative advantage so as to shore up their Internally Generated Revenue (IGR) and stop complete reliance on federal allocations for survival, he made reference to the Lagos State Government local government council funds that the government of the former president, Olusegun Obasanjo withheld in 2004.

In a Wikileaks’ 2005 document, Lagos State local government funds was also reported to have been withheld by the then president, Olusegun Obasanjo in 2004 and it was soon discontinued after late President Musa Yar’adua came into power in 2007.

As such, out of Mr Tinubu’s 8 years (1999-2007) as governor of Lagos State, the local government allocation funds was only withheld from 2004 until Late President Yar’adua suspended it.

Further details in the Wikileaks document shared that the establishment of additional local governments in the state in April, 2004, led the Federal Government to withhold the Local government funds.

Mr Tinubu started his tenure as a Lagos State governor in 1999 and the allocated funds were withheld starting from 2004, already five years into his eight-year two- term tenure. Therefore, Mr Tinubu’s statement is misleading.

Bola Tinubu failed to mention that the withheld funds only lasted for a certain period of time in his tenure as the Lagos State Governor. Also, the withheld funds are the local government council allocations. Hence, the claim is misleading.

Claim 2: Bola Tinubu, in a recent interview with Daily Trust, made a claim that Lagos State is the largest economy in Africa.

According to Statista, Nigeria has become the biggest economy on the African continent over the last 30 years.

Nigeria’s GDP increased by 3.4 per cent last year, after contracting by 1.92 per cent in 2020, according to Al Jazeera.

Lagos, on the other hand, has established a reputation as a digital centre that is fast transitioning to a 24-hour economy, accounting for 10% of Nigeria’s total GDP of $432.3 billion.

As reported here by Al Jazeera, Nigeria remains the largest economy in Africa.

We noted that the presidential aspirant could also be referring to cities’ economies in Africa. In that regard, we conducted research on the largest economy in African cities.

There are also no facts to clearly state that Lagos State is the city with the largest economy in Africa.

INVESTIGATION: How Oyo State, contractors spent N1.1bn on water projects, but communities don’t have a drop

See 7 foods you need to eat for increased sexual stamina

Ladies’ special: 5 best ways to stay happy during your period

Here’s how to make Apple cake