Medvedev, champion in Cincinnati in 2019, sharpened his game for his upcoming US Open title defense with a 7-6, 6-3 win over 11th seeded Fritz, while Tsitsipas could manage only a single break chance in a three set slugfest with Isner but it was enough to clinch a 7-6, 5-7, 6-3 victory.

Medvedev’s win was powered by 18 aces while a misfiring Fritz, one of the game’s big-hitters, had just three offset by three double-faults.

Isner, the biggest server in men’s tennis with nearly 200 more aces than his nearest rival Nick Kyrgios, also had 18 aces but it was still not enough to put away his patient Greek opponent.

While it looked a comfortable win for Medvedev it was anything but, with the Russian saving three set points in the opener before finally prevailing 7-1 in the tie-break.

From that point on Medvedev took charge, grabbing the only break of the match early in the second, and that would be all that was required to advance to the last four in Cincinnati for the second consecutive year. 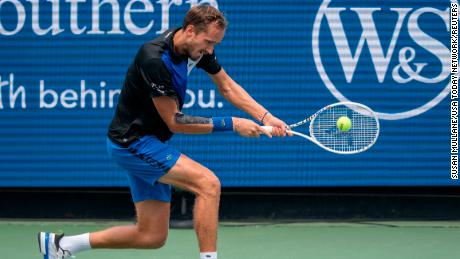 “The first set he was on top of me a little bit,” admitted Medvedev. “He had many more chances than I did on my serve, but I managed to stay in.

“There were some set points where I could have missed and no one would have talked about it, it would have been normal.

“But I managed to stay in the set and that helped me win the match.”

Breaks were just as scarce in the Tsitsipas and Isner match.

After an opening set without a single break chance for either player, Tsitsipas grabbed the lead taking the tie-breaker 7-5.

The first break opportunity would finally come in the 11th game of the second set when Isner would need three chances to convert and take a 6-5 lead, then holding serve to send the contest to a decider.

Up 4-3 and with Isner serving, Tsitsipas would finally get his one and only break chance, and he made it count — punching the air in delight as he watched the American’s return sail long for a 5-3 lead. 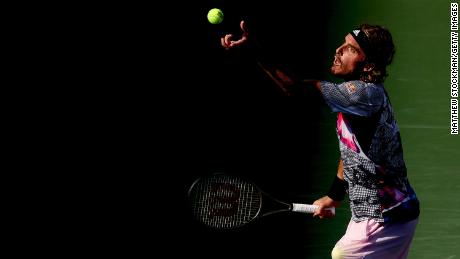 “I think the most important thing with him is to try and stay patient because there will be a lot situations you cannot really control,” said Tsitsipas, who next takes on Medvedev for a spot in Sunday’s final.

“It all came to a very few points at the end…I was just able to hang in there and play one more ball back and not give him much to work with.”

British number one Cameron Norrie held off third seed Carlos Alcaraz to claim a 7-6, 6-7, 6-4 win and book his place in the semifinals, where he will face Borna Coric after the Croatian saw off Felix Auger-Aliassime 6-4, 6-4.

Norrie squandered a 4-1 lead in the second set before roaring back from 1-3 down in the decider to topple the 19-year-old Spaniard in just over three hours.

“I just wanted to hang tough with him. I thought I had the advantage in physicality and the legs and I was just trying to make every rally as physical as I could,” said Norrie.

Alcaraz, seeking his third ATP Masters 1000 title this season, was left to rue a string of break point opportunities, converting just two from 13 as Norrie got the better of his opponent’s serve at 4-4 in the third set to secure the win.

“It was a really good battle and just what I needed ahead of the US Open,” added Norrie.

Corruption not cause for 243 soldiers’ discharge – Army

Venus Williams forced to withdraw from Australian Open with injury

Carlos Alcaraz will miss the Australian Open due to injury