Having withdrawn from Wimbledon with an abdominal strain last month, Nadal returned to action on Wednesday and lost 7-6 4-6 6-3 against Croatia’s Borna Ćorić in a match that lasted close to three hours.

He will now look ahead to the US Open at the end of the month, where he will aim to win his fifth crown at Flushing Meadows and 23rd overall grand slam singles title.

“The main thing for me is to stay healthy,” Nadal told reporters. “It has been a difficult injury to manage, to be honest.

“The last month and a half hasn’t been easy because, having a tear on the abdominal, you don’t know when (you will be) 100 percent over the thing, so that affects me a little bit in terms of not (being) sure if you are able to try your best in every serve.”

READ: Serena Williams loses to Emma Raducanu in Cincinnati opening match with US Open on the horizon 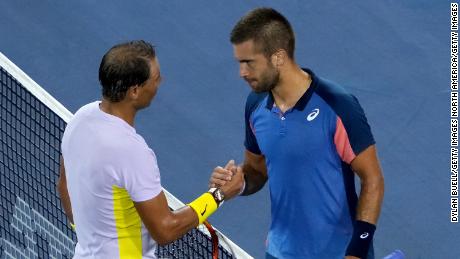 Nadal had two set points in the first-set tie break but failed to convert either, including when he wafted a forehand volley wide before a double fault handed Ćorić an early lead in the match.

The Spaniard fought back in the second set to level the contest, but Ćorić broke at 3-2 in the decider and saw out the set to claim his third win against Nadal in five meetings.

Ćorić, who was absent for more than a year after undergoing shoulder surgery in May 2021, ended the match with 39 winners and will face another Spaniard, Roberto Bautista Agut, in the third round.

“It’s difficult to take a lot of positive things, but I need to improve,” said Nadal.

“I need to practice. I need to return better. I need days (on the court), and that’s the truth. Obviously, I had my chances in the beginning. In the tie-break, I had two important chances with two set points that I played terribly with two more-or-less easy shots.”

Nadal’s last US Open title came in 2019, and since then, he has claimed three more grand slam victories to surpass Roger Federer at the top of the men’s all-time list.

This year’s tournament in New York gets underway on August 29.

20 defining moments from his career so far

Naomi Osaka: Speculation grows as to whether tennis star will play the Australian Open