Victory earned Ćorić the first Masters 1000 title of his career — he lost his only previous Masters 1000 final to Novak Djokovic in 2018 — and marked a triumphant return after a difficult year.

Previously ranked as high as 12th in the world, Ćorić missed much of 2021 with a shoulder injury and dropped down the rankings, but will now leap up to world No. 29 thanks to his win.

The 25-year-old was certainly made to earn his title, too, having to overcome Rafael Nadal, Roberto Bautista Agut, Felix Auger-Aliassime and Cameron Norrie en route to the final.

“Thank you to my parents, who are not here, my sister and my team,” Ćorić said in his on court interview, per ATP. “It has been very tough for us.

“With my physio, if I didn’t have him, I wouldn’t be on the court. Then, of course, to my tennis coach, Mate. We have been working very hard and now we are here.” 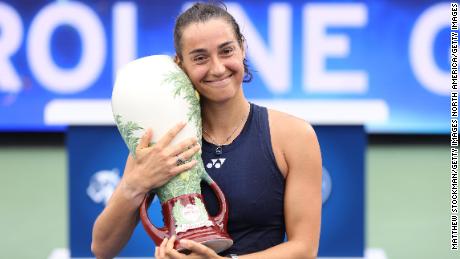 In the women’s final, Garcia became the first qualifier to win a WTA 1000 title thanks to her 6-2 6-4 victory over two-time grand slam champion Petra Kvitova.

After battling through qualifying, Garcia then had to beat Maria Sakkari, Aryna Sabalenka and Jessica Pegula — all ranked in the world’s top 10 — to reach the final.

“Pure joy … just happiness,” Garcia told reporters, per the WTA. “Every single win is very important. Every title is very special, 250, 1000, it’s always very hard to describe it. It’s not happening so often and you have to really enjoy it.

“I’m really grateful for this great week of tennis, and to win another title, it’s very special. Every match, every day was a new day, new challenge. Every time I had to be focused on myself, on my game, what can I do, how I can be more aggressive, how can I improve.

“Just one day at a time I ended up here today in the final and now lifting the trophy.”

Venus Williams forced to withdraw from Australian Open with injury

Carlos Alcaraz will miss the Australian Open due to injury